In one of my creative business books, I wrote about the “work life balance”. Since then I’ve travelled one step further. Now I practice “Work Life Integration”…

I am proud to have a ‘lifestyle business’. Some people work hard all their lives in jobs they don’t  like, so that in retirement they can travel and live the dream. For me, travelling and work are combined. I don’t want to retire, because I’m living the life … now.

I was commissioned to speak at a conference in Colombia about creative entrepreneurship and deliver a workshop about the creative economy. I flew to Latin America three weeks early, with my big suitcase full of my work stuff, in order to leave it in a hostel while I went backpacking around Guatemala, Belize, Honduras, El Salvador and Nicaragua.

Because of flight delays I arrived in Bogotá a day later than expected. When the immigration officer asked me how long I was planning to stay in Colombia, I felt quite rude when I said …. “About two hours!”  I jumped in a taxi to the hostel, took a shower, drank a coffee, and transformed myself from a business traveller to a backpacker.

I travelled with my backpack but also with my laptop because I continued to work while on the road, keeping in touch with clients and projects by email and Skype. In El Salvador, by email, I signed a contract for a major project in Ireland; then after breakfast I went hiking up a volcano. On a completely different trip months later, I filed my UK business tax returns online from Vanuatu before visiting a traditional tribal village.

I love my work. And I have a passion for travelling. I’ve worked in more than 50 countries, from Azerbaijan to Zimbabwe. In total I’ve been to more than 100 countries on six continents. So far! 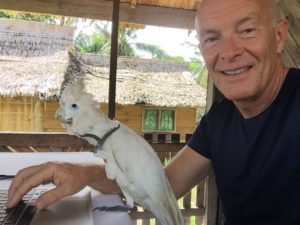 In every sense, travelling has its ups and downs. I’ve flown Business Class to the Far East and travelled overnight in a third class carriage on the Indian railways. I’ve stayed at the poshest of five star hotels and slept in the dingiest of dormitories.

Nowadays, I usually travel alone. I sometimes relish solitude, but sometimes, yes, I feel lonely. But then by pure chance, my path crosses with another traveller. With Liina, an Estonian woman travelling solo, we hired a car together and pioneered a new classic road trip in the Kingdom of Tonga in the South Pacific.

The pace of travel can be fast – or slow. Hectic, chaotic and stressful – or relaxed, peaceful and chilled. I’ve had to literally run through the airport in Amsterdam to get my connection. Unfortunately the guys who transfer baggage from one plane to another didn’t run as fast as me, so I arrived on the Caribbean island of Curaçao with only the clothes I’d travelled in. I had to dash straight to the shopping mall at 8pm to buy clothes for my meeting at the government ministry the following morning. But then at the weekend, when my work was done, my host Eloise took me to a beach where we chilled in the tropical sun. And I went snorkelling amongst the turtles.

In one of my creative business books, I wrote about the “work life balance”. Since then I’ve travelled one step further. Now I practice “Work Life Integration”.

“And then there is the most dangerous risk of all — the risk of spending your life not doing what you want on the bet you can buy yourself the freedom to do it later.”
– Randy Komisar