David Parrish met with Government officials to discuss the development of the creative industries in Laos (Lao PDR).

He was invited along with colleagues from Synergy International to propose projects to enhance the successful development of the creative industries, cultural industries and tourism in Laos at official meetings in Vientiane. 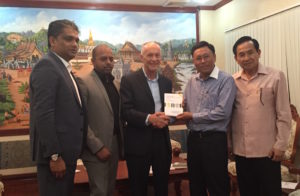 Photo: David presenting a copy of his book to Mr Sounh Manivong, Director General at the Lao PDR Ministry of Information, Culture and Tourism.

David and his colleagues spoke about how they could help the government to develop the creative economy more successfully, based on his successful projects in Brazil, Vietnam, Chile, Colombia and other countries. They proposed projects including workshops for creative entrepreneurs and other initiatives suited to the creative industries in Laos. 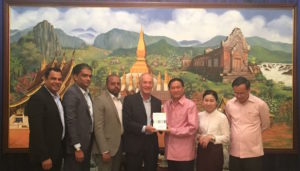 Photo: David presenting a copy of his book to H E Dr Bouanguen Xaphouvong, Vice Minister at the Lao PDR Ministry of Information, Culture and Tourism.

Copies of David’s book ‘T-Shirts and Suits: A Guide to the Business of Creativity’ were presented to government officials, who expressed an interest in translating the book into the Lao language, to help the creative industries in Laos.

David Parrish is a Chief Adviser to Synergy International, a company that works in the cultural and creative industry to nurture cultural values and foster human potential to bring about change. The company works internationally, with offices in Qatar, India, Cyprus, the United Arab Emirates (UAE) and the UK. 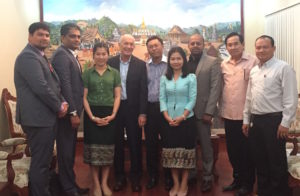 David’s international experience adds value to clients by bringing a wealth of knowledge, ideas, examples and creative business techniques from other cultures and sectors world-wide.

He has worked with clients in more than 40 countries in Europe, Asia, North America, Africa and South America, spanning a range of different countries and cultures.