David delivered the Orange Economy keynote speech at an event in Curaçao in the Netherlands Antilles.

The event about the Curaçao creative economy was a seminar for entrepreneurs on the Caribbean island. It was organised by by Connecting the Dots & Kas di Kultura Curaçao Foundation. 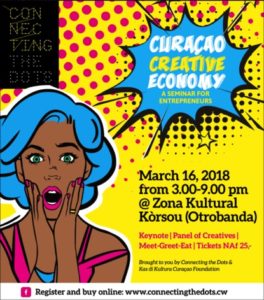 The event was opened by Dr I.S. (Steven) Martina, Minister for Economic Development, who was presented with a signed copy of the book ‘T-Shirts and Suits: A Guide to the Business of Creativity’ by David. 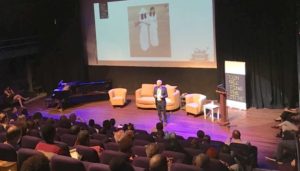 “We are very grateful that David could be our Key Note Speaker at our Curacao Creative Economy event. There is a lot of uncertainty for the creative entrepreneurs in Curaçao. A lot of our creatives often worry that they are making the wrong choice to continue working in the creative industry. David’s keynote was an inspiration to many of them, some of them coming up to me afterwards telling me that now they are confident that it is the right choice and that they are now motivated to make it work! Thank you David!”
– Eloise van Wickeren. Film Commissioner at the Ministry of Economic Development in Curaçao.

David also delivered workshops during his visit to Curaçao.

“David’s workshop on “How to Make Money While You Sleep” gave a lot of participants inspiration and new ideas they can implement in their creative businesses.”
– Arnelys Martus. Curaçao Chamber of Commerce & Industry

Whilst in Curaçao, David was interviewed on the TV station TeleCuraçao.

David’s Orange Economy keynote speech was informed by his own experience as a creative entrepreneur and his international work helping creative enterprises to become even more successful.

He is the author of two books and other publications to help creative entrepreneurs in the orange economy and creative industries to be even more successful.

David’s first book, “T-Shirts and Suits: A Guide to the Business of Creativity” has been published in translations in 13 countries worldwide. The book is designed to help creative enterprises in the creative industries, the Orange Economy and the cultural industries worldwide. 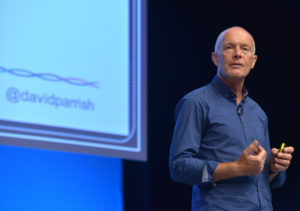 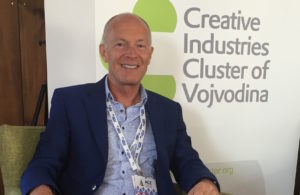 David is a popular inspiring and entertaining keynote speaker at conferences and events world-wide. This Orange Economy keynote speech uses examples from the Orange Economy and creative industries elsewhere in the world. He is one of the most respected international creative industries keynote speakers. David speaks about creative enterprise, the creative economy, the creative and digital industries, the digital economy, cultural enterprise, the cultural economy and creativity in business. As a qualified marketing expert, David speaks about creative marketing, international marketing, marketing strategies and international business.