Here’s an article I wrote about the situation in Liverpool, originally published in The City Tribune entitled ‘The Invisible Sector’.

It’s clear that Liverpool is a port city when you see the river Mersey as you drive down Parliament Street. What you probably won’t notice, opposite Cain’s Brewery, is a large old warehouse. Clearly a relic of Liverpool’s past as a great trading port, it could be derelict. The truth is exactly the opposite.

Known only to those “in the know”, nowadays it’s called Elevator Studios and houses some of the most exciting, cutting-edge and successful businesses in the city. This is where computer games are designed and sold online globally, music videos are recorded, and TV adverts created.

I fantasise that if I had a magic wand, I’d transform the red brick walls into a modern glass building more fitting to its contents, but more importantly, so that Liverpool and the world could see this hive of activity on the edge of the city centre. 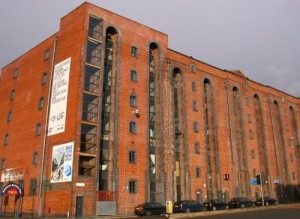 For now, though, all this remains hidden. That’s why I think of the creative industries in the city of Liverpool as the “invisible sector”.

The creative and digital industries create more wealth and jobs than many other sectors in Liverpool and the rest of the UK but you’d never think that just from looking around. This sector has thousands of micro businesses with fewer than ten employees, so they don’t get picked up by the economic radar that’s scanning only for big businesses. Creating new jobs in twos and threes, hundreds of times over, month by month, is great news for the economy, but not seen as “news” by the media.

In some ways, it doesn’t matter. These are real people doing real jobs, selling real products worldwide and paying real taxes. But in other ways it does matter greatly. Because if the policy makers who invest in business infrastructure look only towards the big shiny visible sectors of the economy, they’ll fail to do their job. My fear is that Liverpool will overlook a sector that will drive the economy of the future, because it doesn’t conform to the ‘big industry’ model of the past.

It’s not clever to drive the economy looking wistfully into the rear view mirror. Instead, we should look through the windscreen to an exciting future. The dashboard indicates that the tank is full of creativity and jobs are being clocked up steadily. Let’s speed up!

The Baltic Triangle is the model of the future, where green shoots are growing out of the industrial wasteland. Unknown to most Liverpudlians, here is an area overflowing with strong businesses at the cutting edge of creativity. These businesses are cool, unconventional – and successful. Amongst the old industrial buildings, bright new structures are emerging too, such as Baltic Creative.

Liverpool’s world-class universities attract some of the best students from around the world. Three years later, it’s the creative sector that keeps them here. Liverpool’s graduates set up businesses and there’s a healthy mix of local and global accents in the creative community, indicating that crucial mix of cultures that has made this port city what it is. Such cultural mixtures are characteristic of all great creative cities.

Liverpool is renowned internationally for its creativity, not only in terms of artistic creativity but the wider creativity that’s about ingenuity, and thinking differently, in all fields. Liverpool has the ability – and the character – to play a different game, to do things its own way. It shouldn’t try to be a smaller copy of London, and doesn’t need to be high in the creative industries league tables so beloved of economists, statisticians and politicians.

The city will do its own thing, in its own way, anyway. It always did and always will.

Liverpool’s unique creative sector was always a part of this. It will be a crucial part of the future too, so let’s give it the recognition and support it needs to allow it to flourish.