Leanda Ryan is the director of Leanda Ryan Graphic Design, in Manchester, UK. Her story is an interesting one:
“Flickr was the first service I signed up for 2005. I posted a few pictures but at this point I wasn’t really thinking about using online social networking for business purposes. However there are no hard edges when you are a designer or other type of creative person, your leisure and professional worlds tend to be inextricably linked.

“I picked it up again in 2006, fuelled by a renewed interest in photography. I wanted to be able to create images quickly, publish them and get some feedback. At this point I realised that in order to get a response to an image I needed to join flickr groups and submit my images to those groups. From there my contact list grew – individuals and groups brought together based on affinity and mutual interests. flickr became, and still is, my online scrapbook. It’s a place to share visual ideas, new developments and trends in design and technology.

“Then I joined last.fm, a website that tracks what I’m listening to and connects me to users that have a similar music profile. Here users can recommend and discover new music, meet up at music events and join groups.”

Leanda says that she became an ‘online social network junkie’. “You name it and I’ve probably signed up for it”, she said. “The ones I find most useful as working tools are probably social bookmarking sites such as del.icio.us, flickr – which I couldn’t live without – and of course twitter. Twitter is the modern day water cooler. I work from home and can sometimes feel isolated, but with twitter I can throw out a question or a comment and get an instant response from contacts spanning several time zones. It’s become invaluable for sharing, learning, advice, and for finding people to work on projects with. “ 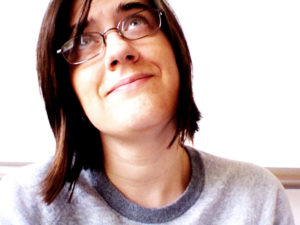 Essentially, business takes place between people, and Leanda emphasises the importance of the ‘personal profile’ in social networking sites. This is the equivalent of the ‘small talk’ which happens in face to face business networking and meetings. It is these snippets of information which help people to bond, like each other and build trust between them. The message must be right for the medium and so in contrast with business websites, the information on social networking sites is more personal, the atmosphere is more ‘laid back’, and the etiquette much more informal. Significantly, Leanda says she is an introvert in real life but very much an extrovert online. Photos also tend to be more quirky and fun so Leanda uses the one below on social networking sites.

Leanda’s social networking through last.fm and other networks led to winning a contract to design a logo and hand tag for her first overseas client, Little Miss Inc., a lingerie company based in New York.

“I’m constantly asked about how I find time to manage all the online services” says Leanda. “It’s true that building an online social network takes time and those relationships have to be nurtured in much the same way as physical networking, but the rewards are so great that I would definitely recommend it.”

Link to Leanda Ryan Graphic Design.
Link to ‘The Message must be right for the Medium’.

Download this article as a PDF document (PDF, 125KB)

*Let me know about your own experiences of online social networking for business.