The Orange Economy meaning was explained by David in his speech at the national Congress of ANATO in Medellin, Colombia.

His speech was: “Inspiration for Travel Agencies from Creativity, Innovation and the Orange Economy Worldwide”.

David speaks worldwide on the Orange Economy, Creativity in Business and Creative Entrepreneurship.

The Orange Economy meaning is unclear to many people because it is a broad concept, embracing the creative industries, the Experience Economy, the Creative Economy and the Cultural Economy, each of which is defined slightly differently and interpreted in different countries in ways which are most relevant to their own circumstances, economics and business culture.

Most recently they have been called the ‘Orange Economy‘ (La Economía Naranja) in Latin America and the Caribbean.

The terminology can be confusing!

Broadly speaking, the term ‘creative industries’ refers to a range of economic activities that are concerned with the generation and commercialisation of creativity, ideas, knowledge and information.

The ‘creative industries’ in a nutshell…

David is an Orange Economy speaker at conferences and other events in Latin America, the Caribbean and around the world. He brings his international experience of new business models in the Orange Economy to audiences worldwide. David’s keynote speeches, presentations and workshops inform and inspire both creative entrepreneurs and policy makers in the Orange Economy.
See Videos and read What Clients Say about David. 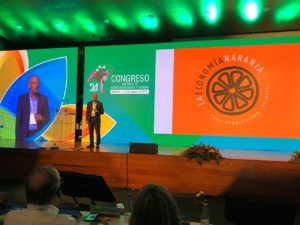 As an Orange Economy speaker, David has delivered speeches and presentations at conferences and events including the following:

WORTH Partnership project weekend in Spain
Masterclass “How to be a Successful Creative Entrepreneur” to open the conference for
designer fashion entrepreneurs in Valencia, Spain (more…)

Creative Business Summit Africa
Keynote speech on the Business of Creativity’ at this pan-African conference in Nairobi, Kenya (more…)

Curaçao Creative Economy
Orange Economy speaker at the ‘Connecting the Dots’ event for creative entrepreneurs in Willemstad, plus workshops on business strategy and intellectual property (more…)