David made a presentation and took part in a digital economy debate at the Free Collective Minds conference in Beirut, Lebanon. The conference was organised by the May Chidiac Foundation.

May Chidiac invited David as a speaker at the conference to share his experience of helping creative and digital enterprises worldwide to become more successful in the digital economy. 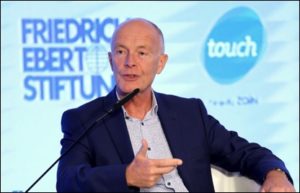 In the digital economy debate, David spoke about and joined in a panel debate about “The Future of Digital Economy and Digital Growth”. The background to this debate was as follows:
Every time we connect to the digital world, we are unconsciously contributing to the continuous growth of innumerable amounts of cloud data. The opportunities and benefits from new technology also come with new sets of problems. Facebook, Twitter, and Google are now facing lawsuits from the European Union (Google was just fined 1 billion dollars by the EU) and just recently had a US congressional hearing explaining their latest cases of misconduct with users’ private information. However, so many experts believe that technology will always face ethical issues but is and will remain a tool to advance science and create spaces for innovation.

Moderator: Maurice Matta, Head of Economy Department at Annahar Newspaper, Producer and Presenter of the Financial News on MTV. (Lebanon) 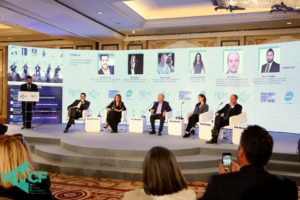 Excerpt from David Parrish presentation at the digital economy debate at the Free Collective Minds conference in Beirut, Lebanon in November 2018:

My perspective on these issues we are discussing here today is based on my work around the world helping creative and digital businesses to grow and become even more successful in the digital economy.

I am lucky to have worked in 50+ countries around the world, helping them with business advice through my consultancy, training workshops, speeches, books and videos.

Now, we hear a lot in the media about the mega corporations: Facebook, Twitter, Google, Amazon, Apple etc.
But we mustn’t overlook what’s happening under the news radar, with millions of smaller businesses, including micro-enterprises.

This is an amazing time for creative entrepreneurs in the digital economy.

The smallest niche markets can be commercialised profitably.

The opportunities for scalability are staggering.

There has been a “levelling” and “democratising” effect which benefits smaller enterprises in the digital economy.

Access to finance is no longer controlled by just banks and venture capitalists – we now have crowdfunding.

In film and video, distribution to markets is no longer controlled by traditional broadcasting corporations and Hollywood – they can all use YouTube – and make money from it.

And at the most micro level, individual solopreneurs are becoming digital nomads, travelling the world with their laptops, running their location-independent enterprises in coding, advertising, journalism, publishing etc.

Of course even these smaller enterprises are part of the global economy with its ethical challenges around privacy.

Many have recently struggled to comply with the European GDPR.

Small business need to protect customers data, and their own, in the cloud.

As I work around the world I see that creative and digital entrepreneurs – and individual citizens – have different levels of understanding about the technology and the ethical issues.

So as we discuss challenges and opportunities in the growing digital economy, let’s not focus only on the mega corporations, nor just in the economies of the west, but look also at small and medium sized creative and digital enterprises right around the world.

The May Chidiac Foundation

The Mission of the May Chidiac Foundation is “Keep on Telling the Truth”. On the fourth anniversary of the attempted assassination of Dr. May Chidiac, the two non-profit organizations, the May Chidiac Foundation and its affiliated Media Institute, were launched. MCF is dedicated to training, research, and education on issues of media, democracy, and social welfare. The media institute aims to bridge the gap between academia and the media industry, providing students and professionals with state of the art technical facilities and training programs in order to improve their competencies and competitiveness.

In association with institutes of higher learning and social affairs, the foundation offers hands-on learning in media, women’s rights, conflict resolution, and development. Through its community activities, from annual conferences to award ceremonies, the May Chidiac Foundation equips individuals with the core principles of human rights and social responsibility to ultimately be a positive influence on their social groups and society at large.

The May Chidiac Foundation believes that by supporting the development of knowledge production industries, it can greatly contribute to making Lebanon a proactive player in the Middle East and the global economy. This will lay the necessary groundwork to foster freedom of expression, human rights, democracy, and good governance. 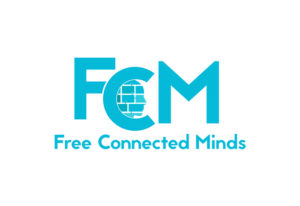 Free Connected Minds (FCM) aims at exploring the influence of digitization and technical developments on imperative social, economic, political, and communication concern. The discussions relate the main themes to the development and advancement of the ever-important notion that is the freedom of creativity and expression. This distinguished conference includes three main chapters: Freedom, Connectivity, and Minds.

Overall, FCM themes have come to include social media, digital activism, smart business, entrepreneurship, and the future of connectivity in media, telecommunications, government, and society.

The digital economy debate was part of the Free Collective Minds conference in November 2018.