A new creative business case study has been published in the ‘Ideas in Action’ series, which features creative entrepreneurs from around the world.

This ‘Ideas in Action’ article reports on social entrepreneurs in Lithuania who combined their creative talents with smart business thinking. In this way, they reached a far bigger audience in Lithuania and elsewhere for their project. The documentary project is about five women who moved to Lithuania from different countries, at different times, and for different reasons. Originally a stage play, Ethnic Kitchen was made into a documentary feature film because the stage play could not keep up with demand. In short, the stage play was not scalable but the digital film of the same production can be distributed much more widely and easily.

Creative Producer Aistė Ptakauskė talked about their entrepreneurial thinking:
“Our main objective was to tell this story to as large an audience as possible. When we found we couldn’t do that through the non-scalable medium of theatre, we decided to switch to a digital format, which is much more scalable”.

By scaling up from physical to digital, the project reached thousands of people at 300 independent screenings throughout Lithuania and beyond: Thailand, Italy, the UK, the USA, Iceland, Switzerland, Belgium. The film is also broadcast by Lithuanian National Television at least once per year. 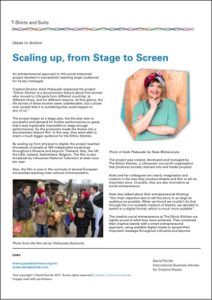 This is the most recent addition to a series of  ‘Ideas in Action’ creative business case study articles. These are short articles that feature business examples from creative enterprises using smart business ideas to become even more successful. Other articles in the ‘Ideas in Action’ series of business examples from around the world feature creative entrepreneurs from Jamaica, Vietnam, Holland, Brazil, Hong Kong, South Africa and the UK.

This creative business case study, written by David Parrish, was inspired by his meeting with Aistė Ptakauskė in Vilnius when he was in Lithuania working with the Faculty of Creative Industries at Vilnius Gediminas Technical University (see details).

Contact David Parrish if you would like him to write a creative business case study about another enterprise or organisation in the creative industries. All articles highlight a smart business technique, method or approach which brings greater success by combining creative talent with smart business thinking.

Every creative business case study in the ‘Ideas in Action’ series is published online as a PDF for free distribution using a Creative Commons licence. This allows anyone to copy, print and redistribute the article provided that it isn’t changed or sold.